New champions crowned in the 2015 jNats at Mt Buller

The competition was the first mogul event of the season held in Victoria, with 100 athletes entering the event from seasonal programs at Mt Buller, Falls Creek and Mt Hotham.

Capturing their first jNats titles were Team Buller Riders (TBR) athletes Daniel Walker and Claudia Gueli who took out the Junior (Under 19) division.

In the Youth (13 and under) division, Flynn Biesse-Fitton and Helena Lansell, both members of the TBR program, claimed victory.

The event took place on Bourke St, which gave the athletes the opportunity to showcase their skills to a large audience, with a number of spectacular jumps and dynamic mogul turns in the bumps.

Athletes competed for one of the strongest prize pools in an Australian junior event, with $1600 prizemoney on offer from major sponsor Bounce Inc and prizes from Bolle and Aussieskier.

Many thanks to the Mt Buller Mountain Operations Team, Race Department, TBR Coaches and volunteers for their efforts in making the event a success. 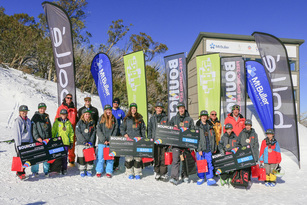 A field of over 60 athletes competed in the event, battling it out for a smorgasbord of prizes including $1000 prizemoney from Bounce Inc, Bolle Goggles and assorted items from Aussieskier.

After each athlete had a qualifying run, the top ten skiers from each division advanced to the final.

Both Jakara Anthony (Junior Female) and Angus Hill (Youth Men) were the number one skiers from qualifying and the final for their division, putting in a commanding performance.

Angus Cronin-Guss (Junior Male) and Lily Schwarz (Youth Female) improved from their qualifying positions to take victory in their division.

It was great to see a number of young competitors take part in their first ever event on a full length mogul course, which will give them great experience for the future.

Video
Click here to see video of the event winners.

Many thanks to Mt Buller, Bounce Inc, Bolle, Aussieskier, TBR, Judges and all volunteers who contributed to make the event an amazing success.

Photo: Mark Ashkanasy 2012
A strong field of 96 athletes from club programs TBR, MBRC and Full Attack on Mt Buller were joined on the Summit course by 2010 Olympian and Australia's first ever female Mogul Skiing World Cup medallist, Britt Cox.
In what was a difficult weekend with high winds and poor visibility forcing the cancellation of a number of events across Australian resorts, the 2012 jNats event was still able to operate under a modified format to ensure the events completion. The poor visibility led to the event needing to make a number of changes for it to take place, such as starting athletes from below the top jump and moving judges up to the bottom air.

The event will take place on the Chamois ski run, featuring 170m of moguls and two jumps for competitors to negotiate.

Two age categories are on offer, junior (born January 1 1998 to December 31 1993) and youth (born 1999 or later), with trophies awarded to each male and female podium winner and prizes donated by K2 and Bolle.

Stay tuned for the entry form and event schedule which should be available in early July.
jNats | all rights reserved © 2021